All the ClubHouse App Statistics You Can Eat

As of 2 days ago, here are some amazing stats that Bruce Hogan, Co-founder & CEO of SoftwarePundit shared on his site: 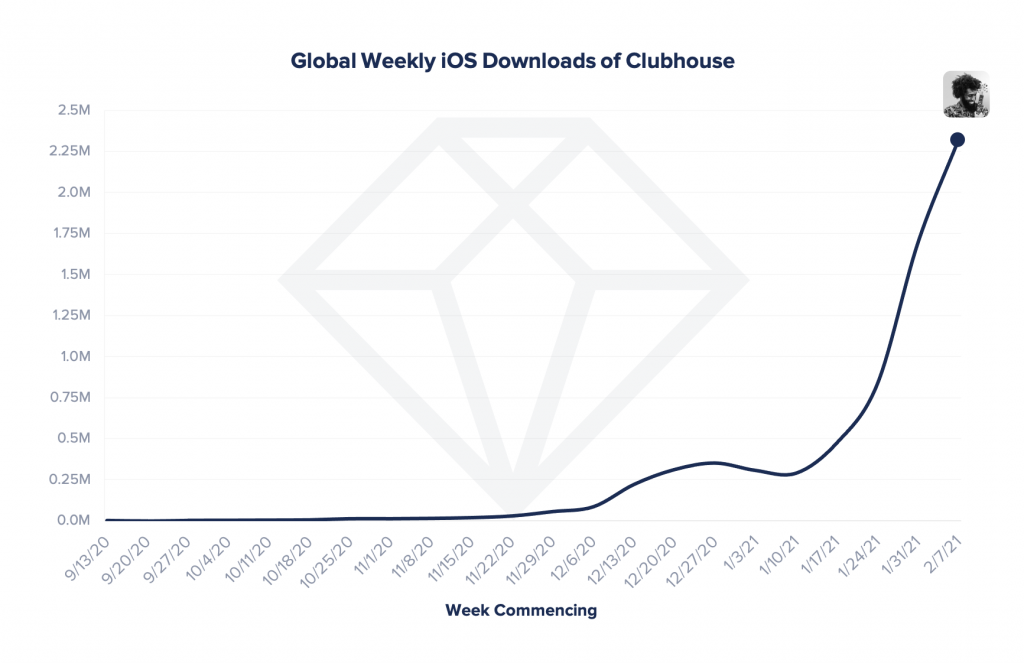 ClubHouse’s Popularity Outside the US

-New room limit is 8k
-10 million weekly active users
-People creating production companies specifically for CH / brands wanting them matched up
-Tipping will be to creator, possibly not rolled out to creator pilot group first?
-Want to build tools enabling room creators being sponsored
-Some people using clubhouse as a full time job now
-First discovery engineer joined the team
-CH has blocked the ‘bot’ accounts used for the audio leak and are working to prevent a repeat of it in the future

Notable Events
-Paul was late due to being in an onboarding room for Senator Tim Kaine!
-2700 rooms this week about love
-Bumble CEO/COO talked about their IPO
-Brazil does a wakeup show similar to Axel’s goodnight show
-Christen played a tribute to Rahaf’s late mother
-Steve Ballmer talked on good time from his hot tub
-No date for elon and kanye yet but things are in motion
Product News
-reiteration of share link function (available via the ‘+’ icon)
-reiteration of accessibility improvements
-Lullaby Axel is now the new app icon
-Clubhouse is hiring https://jobs.lever.co/joinclubhouse
-new location for club request form : faq > club link
-Club requests being processed today (Feb 14)
-Calendar overhaul coming
-Don’t want anonymous entry into rooms
-Do want room entry / get on stage quietly
-Want to avoid the celeb mobbing, also want to fix not being able to say why you can’t join the stage
-Want to address this also in social rooms
-Changing interest does not change feed immediately, but will over time
-Verification codes via email is actually a bit of work but probably eventually
-Android development starting now ; first android engineer starting this week
-Reiterating giving a moderator badge does not impact room notifications
-Some people have ‘security moderators’ to deal with disruptions
-Current ‘verified’ system is when people link twitter / instagrams, ie if they link a verified account elsewhere they are the real person
-Will be able to / have offensive / insensitive rooms marked as such
-Next release will have features for onboarding an entire community to clubhouse

–A few interesting possible feature mentions for clubs : Showing club events right on the club page (as well as possibly also doing this for users, ie all the events you schedule will be shown on your profile page)
-There was also a mention of being able to differentiate club founders from admins/members (to address the possibility of being removed from your own club due to the eventual Club Drama)
-Discussion on filtering based on language due to Clubhouse’s expanding global reach!
-Discussion on broadening the types of Clubhouse links that can be shared (ie: links to profiles and club pages)
-Some community members have hardware hacks to make CH more like an actual radio call-in show (google for this!)
-Some form of ‘green room’ functionality (kind of like how you can have a private club room before taking it public) is coming!
–The 5K room member limit will eventually be increased, with a goal of having it infinite!
-Making someone a moderator does NOT have any impact on the room notifications (bap the clout chasers on the nose when you see them doing it!)
-Tipping is still coming, some discussion of whether to make it externally accessible (ie you can tip creators from outside of Clubhouse)
-Accessibility fixes for people who are blind coming (currently some buttons don’t have proper text labels)
-IMPORTANT: There is a growing house-husband movement on Clubhouse that we should all be very thankful for. MORE TO COME!
Other than that, it seems that the NYT vs Techbro war firmly centered in Clubhouse has no signs of abatement!

-The audience can now report trolling
-Sharing links from within a room to the room is coming!
-The issue with some external links to rooms not working (ie: when you share them via text message) should be fixed!
-We heard again about the ‘one-off’ onboard feature coming soon (think of it like a club event you can schedule for onboarding)
-It’s Black History month! History Club will also be doing events on Black History during Feb too.
-Possible new Club features : Showing upcoming / past events right on the Club page!
-We heard a re-iteration of the fact that follow for follow rooms are not ok!
-We heard a re-iteration of the zero tolerance trolling policy, but also that false reports are equivalent in severity.
-A hack for the hard of hearing : You can pipe Clubhouse audio to Google Meet, turn on the closed captioning and it’s apparently quite accurate!

-Clubhouse (aka Alpha Exploration Co) has received more funding from a16z and 180 other investors.
-Not mentioned at the town hall, but still a thing, are some a16z changes like Sonal Chokshi leading the a16z content creation to include things outside of portfolio companies.
-Paul and Rohan have a blog post up at https://www.joinclubhouse.com/welcoming-more-voices
-Android app is coming soon!
-Hiring also being done around accessibility / localization.
-Same day Club approval is coming!
-On the monetization horizon : Tipping (next 2 weeks), Ticketed events, and Subscriptions
-A creator grant program is also on the horizon!
-A notable event : A Moesha cast reunion on Clubhouse!
-A couple in Nigeria met over clubhouse!
-A ‘swipe away’ feature has been added to remove rooms you don’t want to see from the hallway, this will also factor into the algorithm (possibly at a future date).
-New options have also been added to the hand raise queue, you can restrict raises to club members or follows.
-Clubhouse is testing another higher quality audio feature.
-Clubhouse is also looking at ‘one-off’ event onboarding, ie a workflow and features to bring people on CH for an event. (Aside: I think this might already be in play for a few people on Substack like Mike Solana, if you do a paid signup to his newsletter you’ll be sent a link which lets you join his private club).
-Coming is the ability to share a link to a room from within the room itself vs the calendar.

-In general, the latest improvements made by the team have been centered on backend infrastructure and club creation infrastructure. This means that hopefully your club requests won’t take as long!
-Some user-tangible changes too! If you used the ‘creator name’ feature, you can now remove it. As with other app name changes, this is a one-time thing.
-You can now ‘long-press’ or tap and hold on someone’s name to report a troll. This allegedly will lead to ‘permanent removal’ from Clubhouse.
-An upcoming feature will be the ability to ‘hide’ rooms from your feed, algorithmic consequences (ie you will see rooms like it less often) are also likely upcoming.
-Another upcoming feature will benefit public clubs : An ‘in-between’ state of no hand-raises or everyone can raise their hands, only people in the club can raise their hands.
-The ongoing question of a ‘creator’ user class has been answered with probably not, due to complexity.
-Future plans about clubs seem to indicate that the ‘best’ ones will feature more prominently (this probably means metrics). So in other words, how often a club does events / how well they are attended will probably affect your Club’s ‘rankings’ in Clubhouse.
-Clubhouse DM’s are coming!
-Recording a room on your own (as the creator for wider distribution) is fine if you let everyone know + get permission explicitly from all speakers.