Top Influencers on the Next Tik Tok: ClubHouse

If you haven’t heard of it yet, ClubHouse is the new rage.  It’s the Tik Tok for older people in my humble opinion — via Audio.  Think of Zoom meets Podcasts and had a beautiful step daughter.  OK, that was a horrible analogy, but it’s a bunch of people having “authentic” conversations in curated rooms.

After the new and improved version of Vine became the “new thing,” (Not ClubHouse, but TikTok) everyone has been trying to figure out how to act like teens and build a brand.  Why would you not given how fast it has been growing?

However, Rohan Seth and Paul Davison had different plans — leveraging the podcast craze of the past decade, they built a different form of podcast — adding on top of the earlier analogy, think of how talk radio used to be.  People would call in and have a chance to ask questions.  The same thing happens a bit on ClubHouse.

And it looks like it’s paying off recently.  This is data from appfigures starting off the year and their 2nd bullet point highlighted the growth.  Here’s what they had to say:

Did you ever think Twitter but with voice would be a great idea? Probably not, but some did and managed to get enough funding to get it off the ground.

Clubhouse is still in private beta and is only available for iOS, but managed to sneak into the top chart in the US.

Downloads rose to 67K on Tuesday (12/29), pushing total downloads to nearly 1M since its release, based on our intelligence.

That’s a new all-time high for the invite-only service, and quite a few beta testers. Imagine having to manage that beta…

Twitter, but for voice, isn’t a new idea. I heard a pitch for a similar service a couple of years ago and thought, like most others, that it’s not the kind of idea that’ll take off. Seems some investors have changed their mind since. 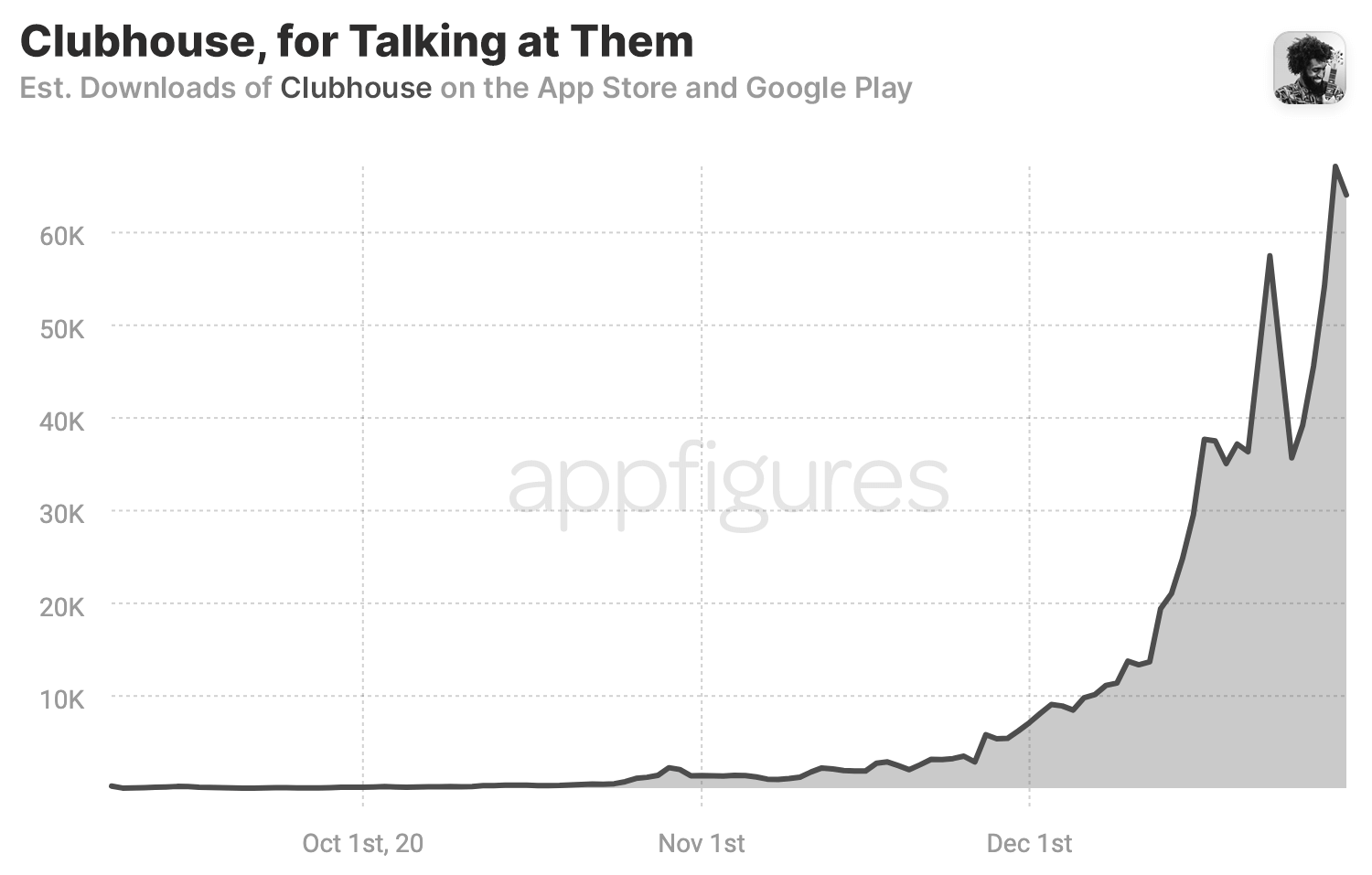 Let’s let some other sources explain more about this phenomena:

What exactly is the Clubhouse app?

Clubhouse is a new social media app that allows users to have “casual, drop-in audio conversations” with others. They could be your friends, celebs or just random strangers. But the main difference to other apps is that is is purely by audio that you’re engaging in conversations.

From the initial interactions I’ve had on the site, it’s about “authenticity” that you can feel from all the people from celebrities to successful entrepreneurs to even the trolls who periodically drop in and try their best to “trump” the other folks who are running the rooms.

You can get as involved as you want, simply listen in to conversations or be the one hosting and leading chats.

The company describes itself as: “A new type of social product based on voice [that] allows people everywhere to talk, tell stories, develop ideas, deepen friendships, and meet interesting new people around the world.”

The Buzz Surrounding the ClubHouse App

But don’t just trust us, check out all the press on it right now:

These are just a few pieces covering the new social phenomena. Google “clubhouse app” or different permutations of the phrase and you’ll see 350,000 results including the aforementioned and more like the following:

From the initial interactions we’ve had on the site, the users talk a lot about the “authenticity” you can feel from people that range from celebrities to successful entrepreneurs to even the trolls who periodically drop in and try their best to “trump” the other folks who are running the rooms.  Personally, we’ve got a lot of “air time” in several rooms, depending on when you enter and how friendly the moderators are.  There are some HUYGE-ly influential folks inside the app and we thought we would share what we’ve learned.

There isn’t a list like this on the web that we’ve been able to find — to hopefully learn who and why they are so popular.

[Photo to be added soon]

[Photo to be added soon]

Honorable Mentions (over 100k+ in followers):

[Photo to be added later]

[Photo to be added later]

Looks like some people (and startup founders) just have good timing.